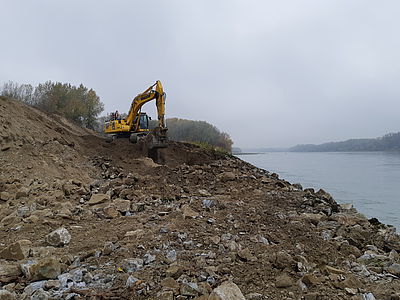 Together with the Danube, the Fischa forms a substantial network of habitats between Vienna and Bratislava, which is used by numerous plant and animal species as an area for migration. While the upper and middle reach of the 35-kilometer-long side-arm of the Danube still shows some ecologically valuable sections, the lower reach and mouth of the river suffer from morphological deficits instead, due to river bank enforcements made from armored stones.

During fall and winter of 2019 viadonau implemented river engineering measures at the mouth of the Fischa for a near-nature redesign of the banks. Roughly 10.000 cubic meters of gravel and amour stones were moved in the context of the renaturation. While the existing river bank enforcement on the upstream side of the river mouth was lowered over a length of 125 meter, on the downstream section the rip-rap was completely removed over a length of an approximately 130 meters.

The revitalized river mouth allows Fischa and Danube to develop dynamically and form natural bank structures. Especially rheophile fish like the ‘Common Nase’ benefit from the renaturation at the Fischa, where diverse river bank habitats can now develop.